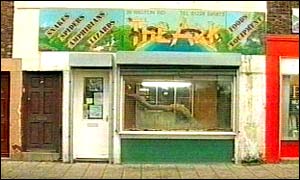 BBC (London, UK) 09 November 02 Chirping crickets threaten shop
A Carlisle pet shop owner says he may have to close after complaints to the city council about runaway crickets.
Adam Kenyon, who runs pet shop The Ark in Wigton Road, has been served with an order by environmental health officers to stop him selling the chirping insects.
The order from Carlisle City Council came after some crickets escaped and ended up in a neighbour's premises.
Mr Kenyon, who sells the crickets as live pet food, said the order could close his business.
Mr Kenyon said: "We had an original incident where I dropped a bag of crickets and some of them escaped.
"The council served me with an abatement order to keep the building cricket-proof.
"It appears that another single cricket has now turned up in a nearby premises, and I have been told that I can no longer sell them."
He said it might mean some of his other in-store species suffering malnutrition, as they are also fed on the insects.
Mr Kenyon said: "I have been told if I don't stop keeping crickets on the premises then I could face a £20,000 fine.
"I would go out of business if I have to stop selling them."
People buy crickets to feed their exotic pets such as snakes, spiders, lizards and amphibians.
Mr Kenyon says he has had letters of support from customers and has started a 300-signature petition to save his cricket sales.