NY Press: Venomous and Sublime: The Viper Tells Its Tale

McGregor's pit vipers from the Philippines. The pit, between snout and mouth, enables the snake to pick up heat signals from prey and foe. (William B. Love for The New York Times) 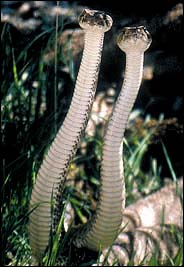