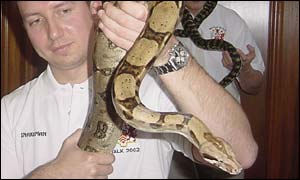 BBC (London, UK) 05 December 02 Potter fans warned off snake gifts
A reptile enthusiast has urged Harry Potter fans not to ask for snakes for Christmas, after the creatures took a lead role in the junior wizard's latest movie.
Rhys Jones has organised a special evening at Cardiff University on Thursday in which experts will be showing off venomous - but not deadly - snakes to the public.
He hopes to correct the public images of snakes and encourage people to handle them correctly.
The exhibition evening on Thursday will introduce the 300-strong audience to a boa, a python and a milk snake.
Rare footage of the world's most dangerous snake, the Echis, will also be shown.
But Mr Jones is concerned that both Harry Potter and TV programmes which provoke snakes to act aggressively have not helped the reputation of the reptiles.
"People will be interested in Harry Potter because it is a huge phenomenon," he said.
"But we don't want people seeing snakes as gifts."
"View snakes from afar, view them and admire them and leave them well alone," he said.
"Either come to an exhibition or please go to your local zoo or go out into the countryside."
On Thursday, the audience will also hear about experts' views which are a world away from popular perceptions.
Many of the snakes on show at the Reptile World evening at the John Pryde Lecture Theatre in Cardiff are rescue animals.
Some have been unwanted pets and a few have been passed on from British Customs.
Mr Jones looks after 12 snakes in a specially-built vivarium which has thermal heating in his Cardiff Bay flat.
He and his fellow enthusiasts say they are not just interested in snakes, but are passionate about them.
"I am fascinated in their behaviour, their movements are beautiful and I genuinely love the animals," he said.
"It really is a labour of love.
"We respect the snakes and handle them correctly, the snake really does come first."
Mr Jones said his fascination for the snake began when he spotted a grass snake down by the river in Ely, Cardiff, as a boy.
"It was absolutely fascinating. I watched her move and I was bitten, so to speak.
A self-taught snake enthusiast, Mr Jones studied genetics and Cardiff University and is now studying for his PhD in herpetology.
The evening talk starts at 1715 GMT.