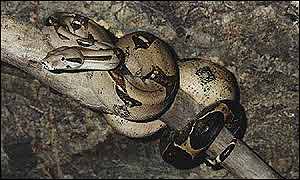 BBC (London, UK) 18 September 02 Snake man admits neglect
A man who photographed tourists with snakes on Blackpool seafront, has been banned from keeping animals for ten years.
Philip Prior, 35, of Talbot Road, Blackpool, admitted causing unnecessary suffering to six Burmese pythons and a boa constrictor.
RSPCA officials and police found that the reptiles were kept in dirty conditions, and many were suffering physical ailments, Blackpool magistrates heard.
Some had breathing difficulties, mouth rot and problems shedding their skin.
Presiding magistrate Dr William Logan told Prior: "The aggravated features of this case are that you had too many snakes in too small a space.
"There was insufficient water and neglect and they were exposed to low temperatures on the promenade, where they were being used for commercial gain."
Prior's solicitor told the court Prior had kept snakes since he was 13, but had to move into smaller premises because his marriage had broken-up.
Blackpool magistrates ordered Prior to pay Ł1,500 towards vets' fees and Ł500 costs.