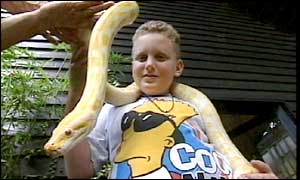 BBC (London, UK) 13 August 02 Museum boy bitten by snake
An investigation is under way after a boy was bitten by a boa constrictor during a museum trip.
The snake, which is not poisonous, sank its fangs into 12-year-old Robert Hartley when he visited Colchester's Natural History Museum on Monday.
The youngster even had to allow the creature to finish biting him - because removing the snake's mouth would have made the injury worse.
However, the incident has not put Robert off his interest in reptiles and he plans to return to the museum later in the week to visit the snake again.
"I like reptiles and I like the way snakes feel. That snake is very rare so it was a rare opportunity to go and touch it.
"It didn't hurt. It's just like someone pinching you a bit," Robert said.
Museum spokeswoman Marie Taylor said there would be an investigation into the incident.
She said: "Obviously we are concerned, but it was not hugely serious. We plan these events with health and safety in mind and we are very responsible.
"We had experts there and plenty of staff.
"Robert was a very enthusiastic - and he still is. It was dealt with professionally and he spent another good hour in the museum after being bitten."
Robert's mother Sylvia, from Great Bentley, Essex, said she thought the baby snake was tired.
She said: "Unfortunately, Robert was holding it when it lashed out.
"I think it was very tired and had been held by a lot of people."
Another child came out to tell Mrs Hartley that her son had been bitten by the boa.
The schoolboy had been holding the snake when it sank four fangs into his arm.