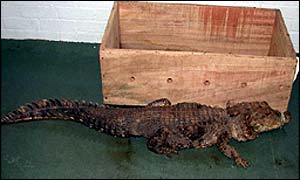 GUARDIAN (London, UK) 15 July 02 Customs seizes crocodiles found in plane's hold
Ten rare crocodiles were seized by Customs and Excise officials at Heathrow airport yesterday after being discovered in the cargo hold of a plane.
The African dwarf crocodiles, an endangered species banned from international trade, were en route from Nigeria to Korea. They grow to 1.5 metres (5ft). It is believed they were destined for the pet trade in Korea.
They are being held at the airport's animal reception centre and may be sent to a breeding programme.
Some 95 other reptiles and amphibians, including 12 royal pythons and 13 monitor lizards, were also confiscated.
Forged documents with the reptiles, which were packed individually in sacks, claimed the shipment consisted of six American alligators and four Nile crocodiles ranched in Benin, west Africa.
A spokesman for Customs and Excise, Nigel Knott, said: "It is believed that the two shipments originated from Nigeria and knowing that they would not get permits from there, the exporters tried to disguise their true origin by forging the Benin export permits."
The traders probably believed the crocodiles would not be discovered because of the dangers of examining dangerous animals, he said.
"Examination and identification of large crocodiles is not without its difficulties, not least from a health and safety angle."
http://www.guardian.co.uk/uk_news/story/0,3604,755349,00.html

BBC (London, UK) 14 July 02 Live crocodiles found at airport
Ten rare crocodiles have been discovered hidden in the hold of a plane at Heathrow airport.
The African Dwarf Crocodiles were en route from Nigeria to Korea, where it is thought they were destined for a private buyer to be kept as exotic pets.
Customs and Excise spokesman Nigel Knott said the reptiles were very valuable and could be a "must-have accessory" for the buyer.
The reptiles - which are an endangered species and banned from international trade - were alive and well and hidden in sacks.
A haul of 95 other reptiles and amphibians, including 12 royal pythons and 13 monitor lizards, was also confiscated.
Documents which alleged that the reptiles were genuine exports had been forged.
The false papers claimed the creatures were of an unprotected species which could be traded, and had been farmed in Benin.
Dangerous
Mr Knott said the dwarf crocodiles were "some of the most endangered species on the planet" - with only about 125,000 in existence.
He said the traders probably believed the crocodiles would not be discovered because of the dangers posed in examining dangerous animals.
"Examination and identification of large crocodiles is not without its difficulties, not least from a health and safety angle."
The reptiles, which can grow up to 5ft in length, are being kept at the Animal Reception Centre at Heathrow until their future is decided upon early next week.
Breeding programme
It is thought that they will join a breeding programme designed to increase their numbers.
Mr Knott said: "If they did survive the journey back and get released back into the wild there is no guarantee that they won't be poached again."
A spokeswoman for Edinburgh Zoo, which has African Dwarf Crocodiles as part of the captive breeding programme in the UK, said: "They are quite common throughout west and tropical Africa.
"But they are hunted quite severely for their meat and skins.
"Even the smaller dwarf crocodiles can quite easily take off your leg so they definitely need to be treated with respect."
http://news.bbc.co.uk/hi/english/uk/england/newsid_2127000/2127942.stm