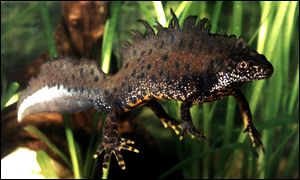 NORTHERN ECHO (Darlington, UK) 02 May 02 Slippery customers nearly put chief in the dock
Police officers were forced to launch a swift cover-up operation yesterday to prevent their chief constable from being arrested - over the plight of rare newts.
Durham Chief Constable George Hedges was theoretically facing the prospect of up to six months behind bars after it emerged that his officers had failed to protect a band of the endangered amphibians.
Mr Hedges nearly found himself on the wrong side of the law when wayward great crested newts fell down an uncovered drain at Peterlee's new Ł2m police station.
Durham Constabulary had given an undertaking to ensure the safety of the newts when they erected the building on land near to a established newt breeding pond.
But only weeks after the station opened, the first of the protected species, along with some common newts, found their way to an uncovered drain and met a murky end.
The great crested newts' demise prompted the appointment of local bobby Mick Hayton as Wildlife Liaison Officer for the Easington Division.
Protected by their own personal officer, the future of the newts looked secure.
All went well - until this week. The great crested newts were back on the move and it was discovered that no action had yet been taken to cover the drain.
PC Hayton again had to fish out the casualties, including a haul of five yesterday afternoon, some dead and some alive.
The accident-prone newts now have more serious implications because new laws make endangering the protected species' lives an arrestable offence.
And with Mr Hedges holding overall responsibility for the force, it was he who would have taken the rap and faced a fine for each dead newt or a six months prison sentence.
But the prospect of a prosecution diminished yesterday afternoon when a cover was swiftly installed over the drain.
The news was welcomed by Rob Lamboll, at English Nature's Castle Eden Dene reserve, who said: "All we wanted was for some action to be taken to stop the newts from going down the drain."
http://www.thisisthenortheast.co.uk/the_north_east/news/NEWS5.html

BBC (London, UK) 02 May 02 Police force gets newt warning
A north-east police force could be prosecuted for allowing rare newts to be washed down drains.
English Nature says it is looking at claims that great crested newts are disappearing under a new Ł2m police station in County Durham.
Planners only agreed to the new station in Peterlee on the understanding the newts - a protected species in the UK - would be cared for.
Durham Constabulary could now face fines of up to Ł5,000 or sentences of up to six months in prison for each dead newt found.
Nature says it has received complaints that great crested newts, which grow up to five inches long, are disappearing down unguarded drains in the station's car park, which opened in October 2001.
Several dead newts have been recovered from the drains by workers at the nearby Castle Eden Dene reserve.
Castle Eden site manager Rob Lamboll said: "It came to our attention that there were uncovered drains in the car park area at the station and several dead newts were being pulled from the drains.
"What is needed is for some kind of mesh to be put over the drains."
Great crested newts are endangered across Europe and they are protected under the 1981 Countryside Act. It is a criminal offence to kill, take, move or handle great crested newts without a licence.
A spokeswoman for English Nature said: "Great crested newts are a protected species, as are their young, eggs and the places they use for rest and shelter.
"We have been informed dead newts have been found in drains at the Peterlee police station and our police wildlife officer is investigating."
A spokeswoman for Durham Police said: "We are looking into the implications of the claims made regarding Peterlee police station."
A family of Great crested newts was moved from the site of a planned new school in Greater Manchester at the cost of Ł80,000 in October 2001.
http://news.bbc.co.uk/hi/english/uk/england/newsid_1963000/1963747.stm