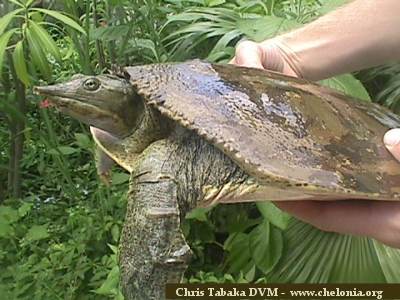 :My softshell is a rescue that I saved from a food fair.Since I brought it home it hid under the rock I put in it's tank and dont want to go out.It's not eating but it's not sick because it tries to bite me whenever I try to touch it!!

If you saved it from a food fair, it is almost certainly wild caught - if not that then definitely "ranched". Either way it has had almost no contact with people. So as a result - it is frightened and very stressed, add this to the stress it felt from the "processing" up to this point and it is no wonder that it is hiding.

I would doubt if it ever will get tame enough not to want to bite you - softshells in general (and muds, musks and snappers) are very aggressive by nature. What I would do to try to ease its stress at this point it to cover the sides of the habitat if you are using an aquarium so it will not be disturbed by being able to see through the walls. I would also give it as much quiet as possible - other than feeding it (try live food - guppies, earthworms) and cleaning it.