An exchange (this forum, 5/10) with Keith about how quickly his king laid after the first observed breeding prompts this. Keith later remembered the pair had been together several weeks before that too, though nothing apparently happened. It didn't matter much in Keith's case that the first introduction was overlooked, because he was breeding the same two animals together both times. But people who might use two different males, or who simply want to know for sure when a first breeding MIGHT have occurred, will benefit from scrupulous records. It doesn't have to be hard.

I'm SURE others have better systems than mine. But i figured it couldn't hurt to share my methods. Hopefully there will be something here that will be useful for newbie or oldtimer.

I keep MOST of my records on pre-formatted, quickie-printed index-sized cards on the front of each cage. That way I don't have to refer to a book to know what's been happening recently. When a card's completed, it goes into a file where it can still be quickly accessed (looking back to see when a female laid the previous year, for example, or whether she bred after a first or second shed, etc.) or ignored for years if not needed.

Here's a typical setup during my breeding season:

The card on the left is my standard cage card. Each snake is ID'd at top including the inventory number at top right (prior cards are indexed by that number, and if a snake is taken to the vet THAT is the number used to ID the snake -- no vet, who is used to identifying patients as "Rover" or "Tweety" wants to wrestle with "1998 hatch male homozygous for amelanism 2/3 chance possible heterozygous for hypomelanism 50% chance possible heterozygous for anerythrism, from Norm Dam vanishing pattern 1995 hatch female" which doesn't exactly roll off the tongue).

Note that I update a new card with pertinent recent information including when I got it and its arrival weight, and its recent shed history, so I don't have to look that up on prior cards. Sheds are color coded green. I record each successful copulation (I express sperm samples after possible matings, and rank the sperm count/viability on a seven-point scale--one to three carats pointing down for very low to likely meaningless inseminations, a midpoint, and one to three carats pointing up for sperm counts up to the maximum observed). I strive for three good (two to three carats up) breedings. Good breedings are color coded orange. Later when a female lays, that information--the date laid, number of good eggs and total in the clutch--all fits on a single line and is color coded yellow. The cards also include feeding records, of course. Some snakes are picky, and with 75-80 adults in my collection it's easier for me to have reminders of which animal eats only very small rat pinks, or only mice fuzzies, than to have to keep that in my head.

But look at how much can be known in a quick glance from the standard card: snake id, source, gender, inventory #, past breeding history (would be noted above the first box, if she'd bred before for me, coded yellow to stand out); shed history; breeding history, etc. Most of these cards also note the animal's weight coming out of brumation and perhaps monthly thereafter, so I can monitor her progression to ovulation and breeding. All this information at a glance makes it a great working tool.

The second "card", the post-it note at right, is added to females' cages during the breeding season.

It enables me to quickly ID the female (top left) and the male i'll breed her to (top right). it records her sheds so i can anticipate when she'll be ready to start introducing to the male. Once I start introducing, I note occasions where nothing seems to have happened (the first example on this card notes that she buried herself and there was no apparent action). Once successful breedings occur they're noted and color coded.

Yes, some of this duplicates info on the other card. Several reasons for that: 1) I occasionally find i've forgotten to record something. It's easy to refer to the other record, get the data, and add it where it was missing. We back up our computers, why not backup our herp records?! 2) The post-it note will be kept with the eggs during incubation (a bold notation is added, showing # of eggs good and total in clutch, date laid, and estimated due date). This extends the "know-at-a-glance" functionality to the rack that contains dozens of tupperware boxes incubating clutches of eggs.

But there are even more important reasons to keep careful records. Here's a post-it from a different female: 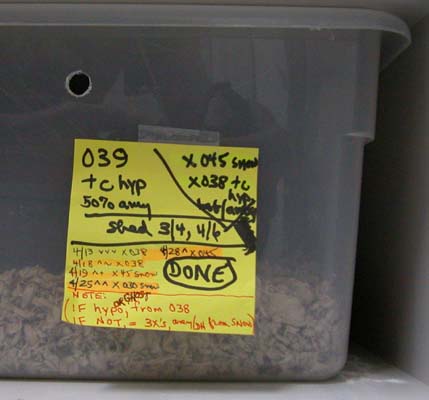 Note that at top right I've indicated two different males this female was bred to, and that in the breedings color-coded orange at the bottom, I've noted not only the date and the sperm count but, in each instance, which male was used. (I keep a different-colored post-it on males' cages, and record each breeding by that male on that card. This allows me to quickly and easily monitor how many times the male's bred and to see any decline--or, after sheds, often an increase--in sperm counts).

I sometimes use mutliple males when I have two of the same kind (I had two breeder snow males this year: I divided the approrpriate females and "assigned" half to one male, half to the other. But in a few instances, where i found only moderate sperm samples in a female, I'd cross her to the other male, too, as backup. No, I won't know which male is the father, but that's usually not of consequence. WARNING: It WILL be of consequence if I produce something dramatically new from one of those females and can't be sure who the father was. So I don't totally endorse that method, and I use it in only when the good seems to outweigh possible disadvantages.)

The other circumstance in which I'll use two males is when the babies will be distinguishable, when I'll know from their phenotype (appearance) who the father had to be. This card is an example of that: The female is a tricolor hypo possible het for anerythristic. I bred her to two males, one a snow (albino and anerythristic) and one a tricolor hypo definite het/anerythristic. If a hypo baby hatches, the hypo male is the ONLY male that could be responsible. Because he's hypo and she's hypo, all their babies would be hypo. IF she is het/anery, then 1/4 of their babies would be anerythristic and since they're ALL already hypo, that 1/4 would be ghosts (hypo and anery). So any ghost baby has to have been fathered by the hypo male also. Lastly, any baby that is NOT hypo or ghost has to have been fathered by the snow male. These could be wild-type, and would be triple hets (hypo mother, albino and anery father) or they could be anerythristics (if the mother is het anery) and would also be double het for the other two (albino and hypo) morphs. I switched to the snow male because
a) the tricolor hypo seemed to have low fertility (see top too lines of breeding records, only the second of which had enough sperm for me to even "count" and color code;
b) the triple hets and especially anery/double hets are in high demand and have exciting breeding potential;
c) the snow male would provide an easy means of testing the female to determine whether she is, in fact, het/anery--always a useful thing to know the following season.

the important thing is that it's all noted on this post-it that will accompany the eggs once the clutch is laid and is incubating. And the lines at the bottom of the post-it will make it impossible for me to not know, immediately, what the parentage is of the babies, no matter what their appearance, and no matter how busy and confusing a day it might be when that hatching occurs.

Record keeping: I recommend it!

Peace
Terry
PS: I keep two other sets of records during the breeding season:
1) A large, poster-sized calendar on which i schedule planned breedings, since males are being bred X multiple females, and then record--and color-code--the outcomes.
2) Before the season, I plan my pairings and create an excel spreadsheet showing each male followed by the females he'll be bred to. There are columsn for recording females' sheds, copulations and then pre-lay shed and laying results. Again everything for the season can be pretty much discerned from that one page of regularly-updated data. An added benefit is that I can SORT subsets -- the females that are going to be bred X 030 snow, for example -- so that they're listed in order of their post-brumation sheds, and thus the likely order in which they'll start breeding. Or I can sort on cells in a column I call "done" so that females I'm not finished breeding yet appear at the top of each male's harem. TD