:Bruce Skipper, Lindsay Pike and I spent a couple hours east of tampa friday. Didn't find a whole lot--I'm still skunked for scarlet kings after 35 years in florida, compared to Bruce's and Lindsay's successes this year alone. Still, it's always good to get outdoors with friends.

:Five seconds after we left the car and stepped into the woods beside the road, we saw this four-foot-plus black racer basking on a brush pile:

:Trees had overgrown some old fencing beside a horse pasture: We hunted through, turned around, and minutes after our first "pass" we found this yellow rat right where we'd been. He was halfway through a hole in a piece of plywood nailed vertically to some fenceposts and was NOT there minutes earlier. I included both pix so you could see him "coming and going" the way we found him: 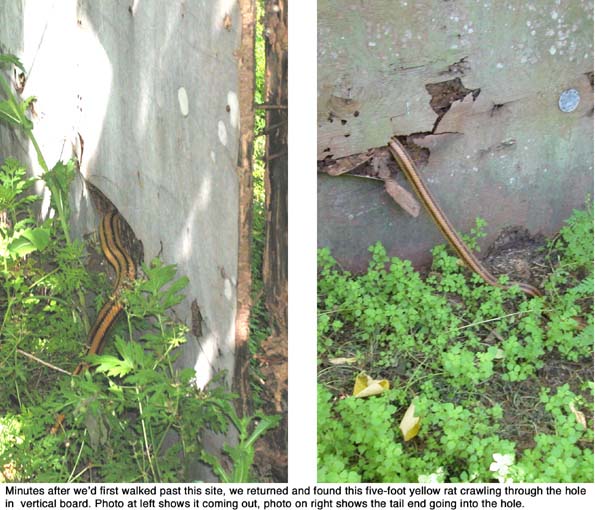 :Lindsay held him for a pic. Despite the rep yellow rats have, it never tried to strike. A nice five-footer, it did put a hellacious musk on lindsay.

:Lindsay's most impressive accomplishment of the trip, however, was catching a racerunner or two by hand. If you've tried that before, you know how hard that is, especially on a sunny day around 80 degrees F. when they're fully active.

:This hunting was all in proximity to commercial development. Other finds & catches included a toad and a treefrog (cuban?), a few skinks and green anoles, and a opossum with her babies.