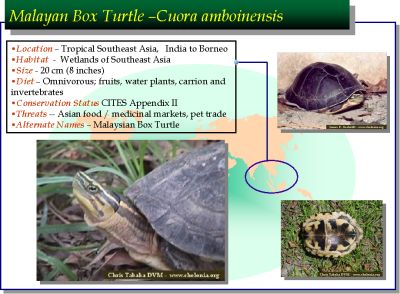 I was just wondering before I do it and I don't want to kill any of my asians or eastern's.
:
Don't do it. For a number of reasons.

In this situation you have two totally different species from two different continents that have not ever had any contact with each other. When the Europeans came to the New World they brought diseases that the natives could not combat - diseases that decimated the Native American populations. In this case you have animals that have been separated much much longer. Same isssue applies though. It is quite possible that the Asian species could be harboring a pathogen to no visable effect that could be fatal to the Terrapene or vise versa.

Second reason - the habitats are not all that similar - Yes they both need high humidity environments but Malayans are very nearly aquatic in habitat - the Terrapene are much more terrestrial.

To mix these species is asking for trouble.