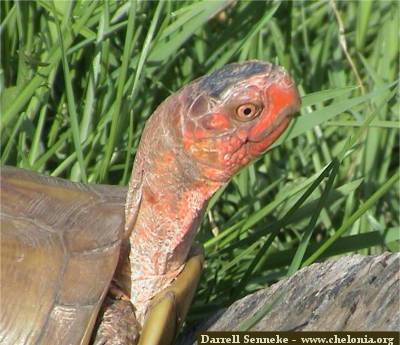 On his shell is a small hole (not seen in this photo), which looks like a B-B shot. Some kids probably shot at him a long time ago.

We have been having a discussion about this on the WCT list serve of late:

The surface layer of keratin on a shell is living material, almost anything that could damage this layer could be the cause of a small localized infection, including scratches from the front nails on male turtles. The fact that it is usually three-toeds that have these tiny pits could be something specific to their habitat that encourages the pits.

The thought once was that these pits were the result of being yanked out of their burrows with tongs when hibernating - except that three-toeds really do not go all that deep and no one has ever been able to put a direct cause and effect to it. I had a female three-toed being kept in a pen develop these over the years (20 years or so)

Mary Hopson cited some research that found that

"In one study of wild 3-toeds, examined in the wild, 46% of adults (over 100mm)had the holes, 33% of males and 62% of females. The holes are natural. Their exact cause is unknown. They are not caused by any tongs or gathering equipment. They are definitely natural in origin."

Regardless - they appear to be non threatening.