Thanks for sharing & nice pictures

:I went to the Brooksville, Florida area March 13 with Lindsay Clack. Our mission was to find a hognose snake. That mission was unsuccessful.

:While there we found:
:Black racer (td)
:Baby coachwhip (LC)
:rough greensnake (DOR)
:Ringneck snake (td)
:Narrow-mouthed frog
:skinks
:fence lizards
:green anoles
:racerunners (observed but not caught)
:Bobcat (we crested a rise in the road and the cat was trotting away from us on the left shoulder, before darting into the woods)

:The road pierced palmetto scrub and oak hammock in the upland areas, and cypress swamps in low-lying land, as in the photo below: 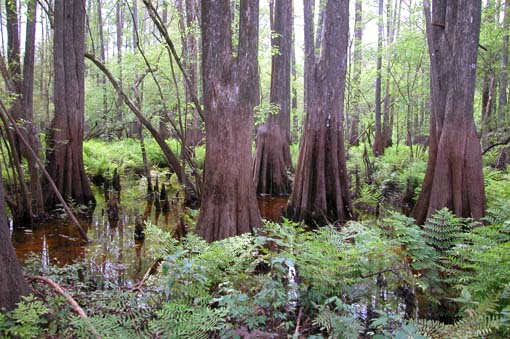 :The photo below shows one of the green anoles, a subadult:

:Here's the coachwhip lindsay found, in trash in a sandy clearing 50 feet off the side of a rural road: 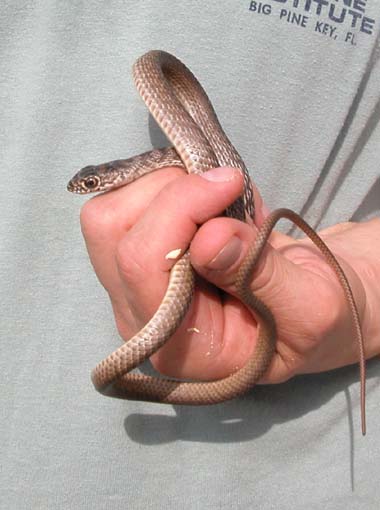 :while we were in that clearing a sheriff's deputy rolled in to check us out. While we stood at the window of the cruiser, and lindsay showed the officer the coachwhip, I turned a board at my feet and caught a subadult black racer. The deputy wasn't a big fan of snakes, but he eventually pulled a map and directed us to additional places to hunt.

:We'd been approached by another deputy earlier in the day, deeper into the woods along a sandy two-track road. Once he decided we weren't up to no good, we had a nice chat with him too.

:All in all, a good day, didn't find our target species but it was great to get out now that "summer" is here.

:We found a pair of pygmy rattlers copulating about 3 weeks ago, in a park only ten miles east of Tampa. There was conversation at that time about how some people claim to have seen Florida panthers in the area--the absolute, official position on that is that they are NOT there, not within 50 miles of there. Less than two weeks later a 108-pound male panther was hit and killed on I-4 only a mile or two from where we'd been when we had the conversation. That was the first panther observed in the area in recent history, and will undoubtedly make us even more observant next time we're in the field there.