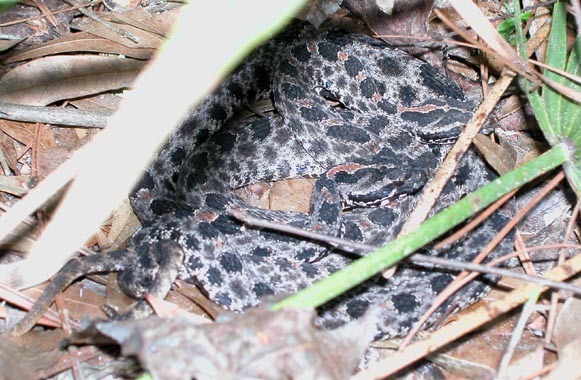 Lindsay Clack and i went to Flatwoods park in hillsborough county, florida, on the 26th of feb.

Four or five minutes into our hike we came upon (ok, Lindsay spotted them!) this pair of pygmy rattlers, a foot or two off the side of a wide path. We photographed them and moved on, and didn't see another snake for the next several hours. bummed, we figured we'd at least go back to see if the pygmies were still there--would that count as four snakes on our daily tally? LOL -- and they were. They'd moved about six inches, and as we observed them this second time we were excited to see they were copulating, so we took some more pix before calling it a day.

Funny thing is, once we got home and looked at the pictures we took the first time, we realized they were copulating then, too. This is one of those pix. I think we were just too excited by our first observation to be uhhh...observant enough.

The day was mostly sunny. Temp was in the sixties when we started around 9:30 am and mid-or-better seventies when we finished, after noon.